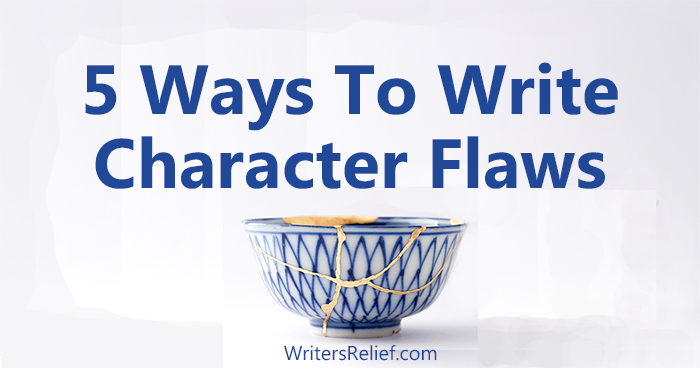 When you’re writing a short story or novel, you want your characters to be realistic and believable. After all, nobody’s perfect—not even your protagonist! While there are many ways to write authentic characters, at Writer’s Relief we know one of the best ways might seem counterintuitive: Give your characters flaws. These very human imperfections will help make your characters more relatable and can be the catalyst for story arcs they learn from (or don’t). Here are 5 ways to write flaws that will make your character three-dimensional without making them unlikeable.

How To Write Character Flaws—With Examples!

Example: Noelle is chronically tardy, and her friend Jared is inflexible. If Noelle is late for rigid plans that Jared has made, arguments will ensue. However, each of them working to better their flaws will not only help them grow as individuals, but strengthen their friendship.

Example: Sable has trouble opening up and trusting others, which can frustrate friends and romantic partners. However, it’s later revealed that Sable was abandoned as a child by his mother.

Temper a character’s flaws with positive traits. If you want a character to be sympathetic, make sure there’s more to their personality—and their actions—than just their flaws. Think about how the individual traits you assign to a character can all work together to create a three-dimensional personality and arc.

Example: The grouchy old man sits on his porch and yells at the neighborhood kids. However, he’s spotted setting out food in his yard for the homeless cats in the neighborhood.

Use the flaw to propel your plot forward. A well-crafted flaw can be both a character trait and a plot device. Your character’s flaw can act as an obstacle for them to overcome over the course of the story. This will help build a clear motivation for the character’s arc. It can also help create and maintain tension in your overall plot, since the character’s flaw will make it harder to reach outside goals.

Example: Let’s continue thinking about Sable, who has trust and commitment issues. Suppose Sable meets someone who could be the perfect romantic partner, and that person wants to be in a relationship. However, in order to have a relationship with this person, Sable would need to overcome fears and barricades and open up about his feelings.

Create flaws that have an array of effects. No character is ever 100 percent good or 100 percent bad—and character traits and flaws fall into these same gray areas. Many flaws can be seen as negative or positive traits, depending on the circumstances in which they appear.

Example: James desperately wants to be promoted to a managerial position. He’s very driven, which is often a strength in a work setting—but he can sometimes take this too far and become tunnel-visioned. When he focuses too hard on his goals, he doesn’t consider whom he may be hurting, so he can be rude and impatient when working with others. While James’s bosses admire his drive, his inability to foster teamwork hinders his progress in his job, and makes his managerial aspirations more difficult to attain.

Giving your characters believable flaws makes them seem more human and relatable (surely Noelle’s chronic lateness and Sable’s trust issues are very common in the real world!). In order to be relatable and forgivable, the flaws must be understandable and surmountable. And in order to keep up the pacing and momentum, readers must see these flaws being challenged and the characters working to overcome them.

Question: What flaws do you like to see in characters?