How Cognitive Bias Can Affect Your Writing | Writer’s Relief 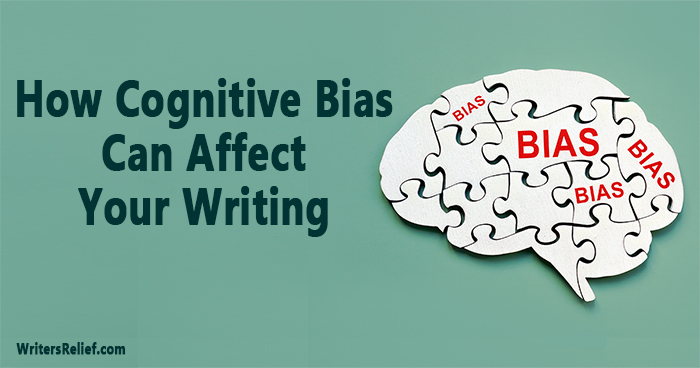 What is cognitive bias? It’s an error in thinking that occurs when the brain tries to interpret the world around it. Specifically, it happens when what we’re interpreting doesn’t match up with our sense of logic, so we draw our own conclusions—which may or may not reflect reality. At Writer’s Relief, we know that cognitive bias can both help and hurt your fiction and nonfiction writing. Here’s how cognitive bias can affect your writing.

Confirmation bias: In this common form of bias, people only look for information that backs up what they already believe to be true. The data can come from news reports, statistics, and even the opinions of other people. If you are trying to be persuasive, it is better to review your argument from both sides—rather than just your own—to build credibility. However, leaning into cognitive bias can show flaws in a character you’ve created, which is good story building.

Hindsight bias: This type of bias happens when someone interprets the outcome of a past experience as more predictable than it really was. For example, you can reflect on a past relationship for your memoir and think “oh, of course we were going to break up,” and list the reasons for it—but at the time, you didn’t know what the outcome would be. In reality and in writing, the conclusion isn’t always obvious before the narrative is finished.

Self-serving bias: People will usually claim positive outcomes over negative ones. For example, one person might take the credit for a group’s success. But if the group fails, the individuals are more likely to distribute the failure among all the group members. Failure and success are the product of multiple efforts, so be careful not to gloss over others’ contributions in favor of one character’s rights or wrongs.

Anchoring bias: This bias happens when we make decisions based on pre-existing information or the first bit of information we receive. This commonly occurs when shopping: If you see two versions of an item, one sold at $1000 and another at $100, you stop looking for options and go with the $100 item—even if it might be available elsewhere for $10. You settle for the second price and don’t continue to price shop because it is a good deal in comparison to the first one. To avoid anchoring bias in your writing, always check multiple sources to ensure the accuracy of your information.

Availability bias: This is the tendency to assume the first thing that comes to mind is obviously the most common answer or occurrence. This can be related to an error in memory, though not necessarily a false one. Instead, availability bias can result from an overemphasis on a specific memory. For example, you may think the person who broke your favorite mug ten years ago is clumsy. However, this person rarely stumbles, bumbles, or drops awesome mugs. Consider the whole picture, rather than your first reaction.

The framing effect: If a decision is overly influenced by how a question and its choices are phrased, this is an example of the framing effect. For instance: This medication has shown improvements in 90% of patients, while another medication shows no improvement in only 10% of patients. Despite having the same results, most people will choose the first option because it is framed in such a way to make the first medicine seem more favorable. If you want to be fair when writing, consider how you are framing the information.

Inattentional blindness: As the name suggests, this happens when you are so focused on something, you fail to notice an easily detected stimulus. For example: A person so focused on their phone that they don’t realize they are stepping into traffic. To avoid this in your writing, consider your arguments and narratives from every angle.

Nonfiction writers must be especially aware of these biases and how they might affect your credibility as the narrator. Always fact check, and never take one point of view as gospel until you’ve done your research. For the sake of writing a good argument or a compelling memoir, it is important to consider various perspectives—not just your own—and utilize knowledge from multiple outside sources. Never assume your memory is flawless.

However, creative and creative nonfiction writers can use cognitive biases to create more realistic characters and faithful characterizations of yourself and others in your next memoir. You can flesh out your subject’s personality, flaws, and limited perspective. Cognitive biases can show readers how narrow-sighted characters can be, while the lack of certain biases will demonstrate they are aware of the bigger picture. This can help you develop relatable, realistic narratives.

Question: How has cognitive bias shaped your writing?

Use Lists In Your Writing Life: Advice From Santa | Writer’s Relief

Use Lists In Your Writing Life: Advice From Santa | Writer’s Relief

9 Top-Paying Side Hustles That Can Pay Full-Time Incomes

How Karl Hughes Built A Team Of 50 Content Writers In Under A Year!