When you’re looking to buy consumer electronics, who’s your trusted source for a fair and honest review? 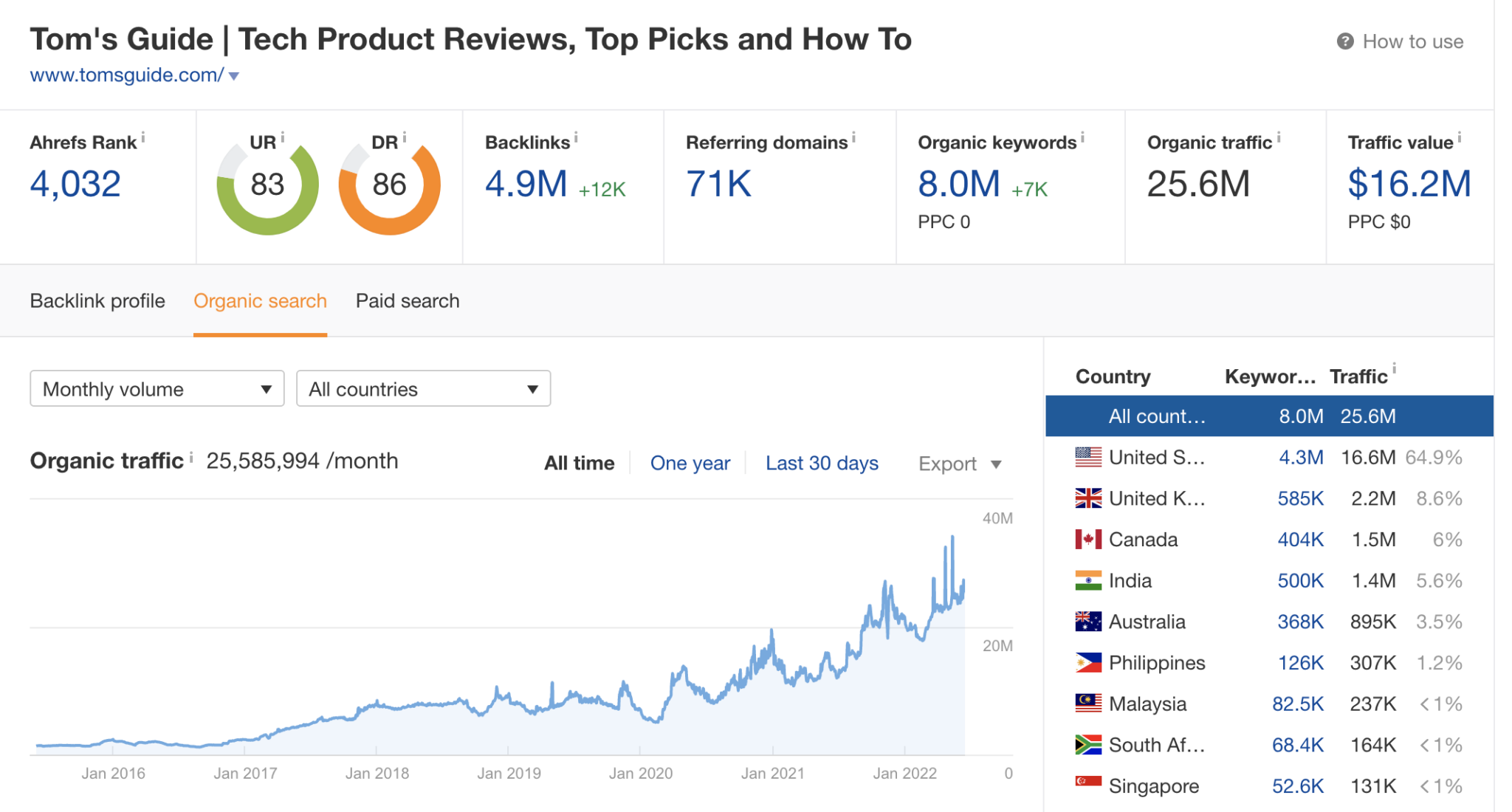 The site has been around since 2007 and is the younger sibling of Tom’s Hardware – a site with a tagline ‘For the hardcore PC enthusiasts.’

And although Tom’s Guide came after, the site’s broader focus on all things consumer electronics has helped it take off to become one of the most successful affiliate sites on the planet.

So we thought we’d take a closer look to see what things we can learn from them.

How Tom’s Guide Gets Its Traffic

A quick look at SimilarWeb shows that a whopping 86.56% of its traffic comes from organic search. 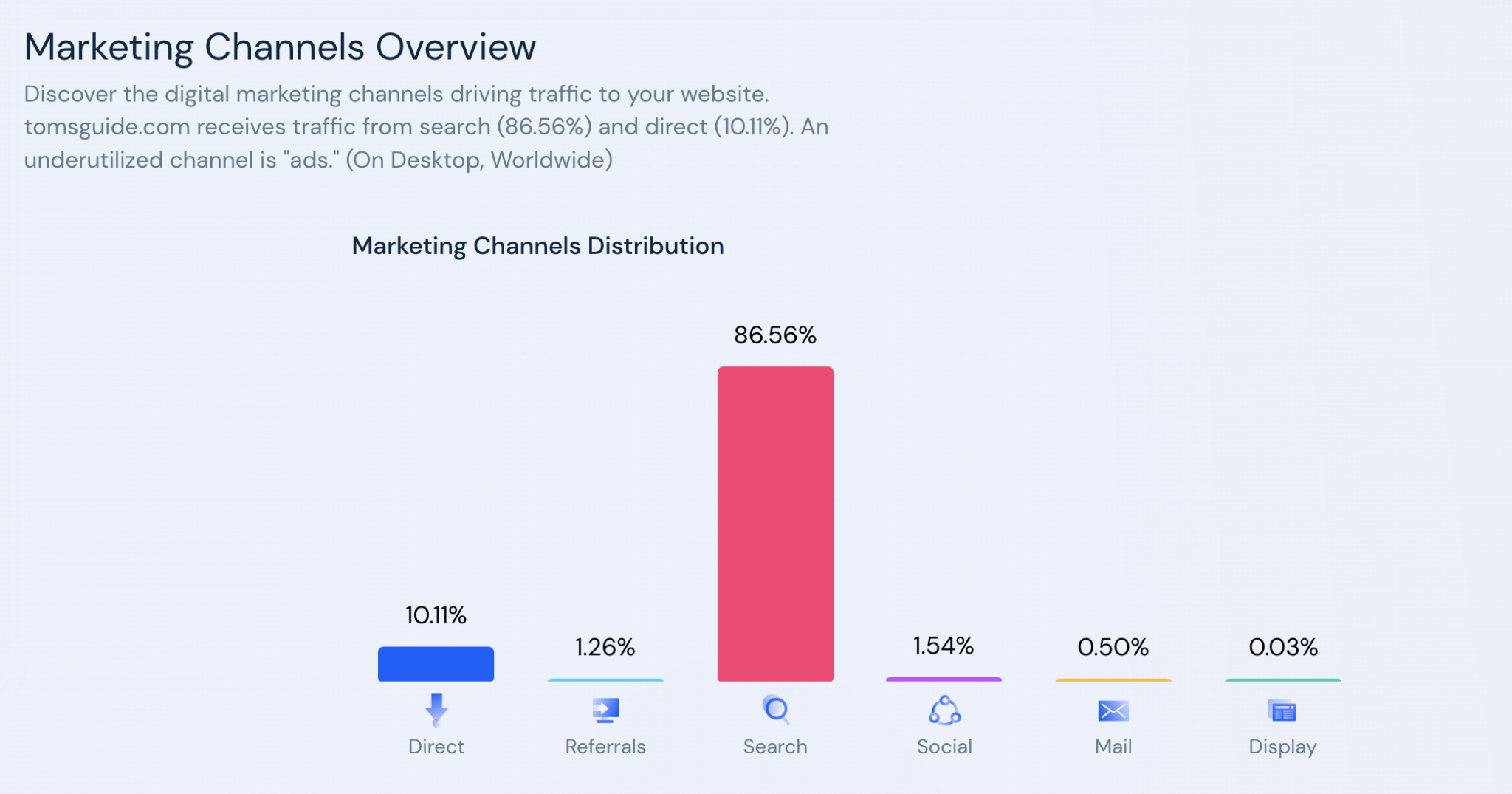 What’s particularly impressive from this overview is how little of their traffic comes from social media.

They benefited a bit from social in the past, though, and some of their articles were shared quite a bit.

But it doesn’t seem to help them much these days, which is fine, as they’ve already reached a very high level of authority and can double down on their strengths – like providing answers to search engines.

So, what kinds of keywords do they target?

They have a nice balance of informational and commercial/transactional content.

But they don’t ‘overdo it’ with the informational content. It seems they have a healthy amount to support and balance out their money-making pages and avoid potential penalties.

And their strategy is working.

Here are some of their top pages. 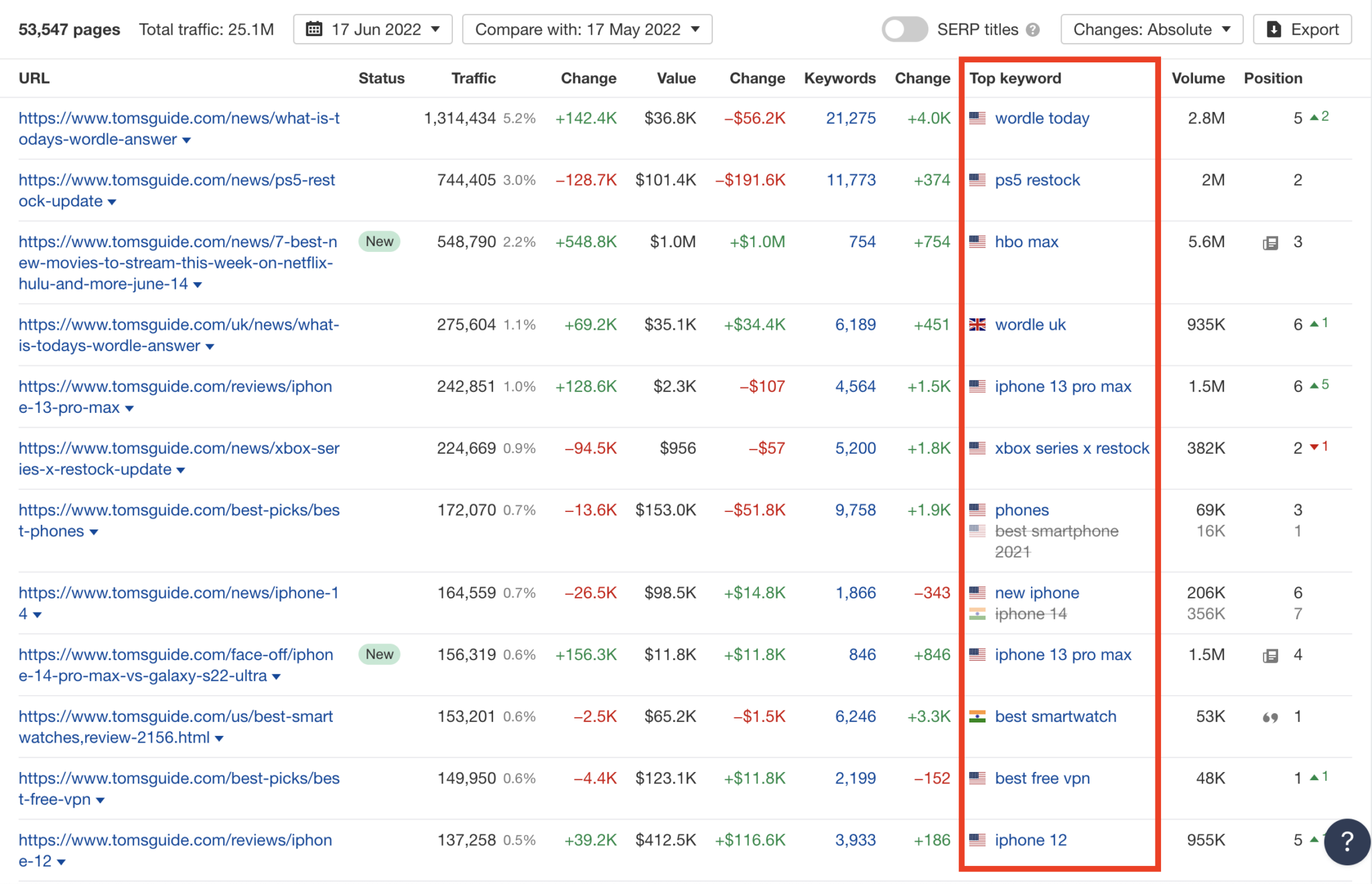 Those are some big, juicy keywords that are certainly generating some healthy profits.

And they also rank in the top 10 for some major brand keywords.

So how do they do it? Well, for one thing, they have lots of powerful backlinks.

As you’d expect, Tom’s Guide has tons of impressive links going to their pages.

For instance, Microsoft links to their Microsoft Surface review.

And they’ve done a great job of building links to other high-priority, competitive pages.

Whether organically, with outreach, or more likely a mixture of both, their pages (and money pages) are constantly gaining links. 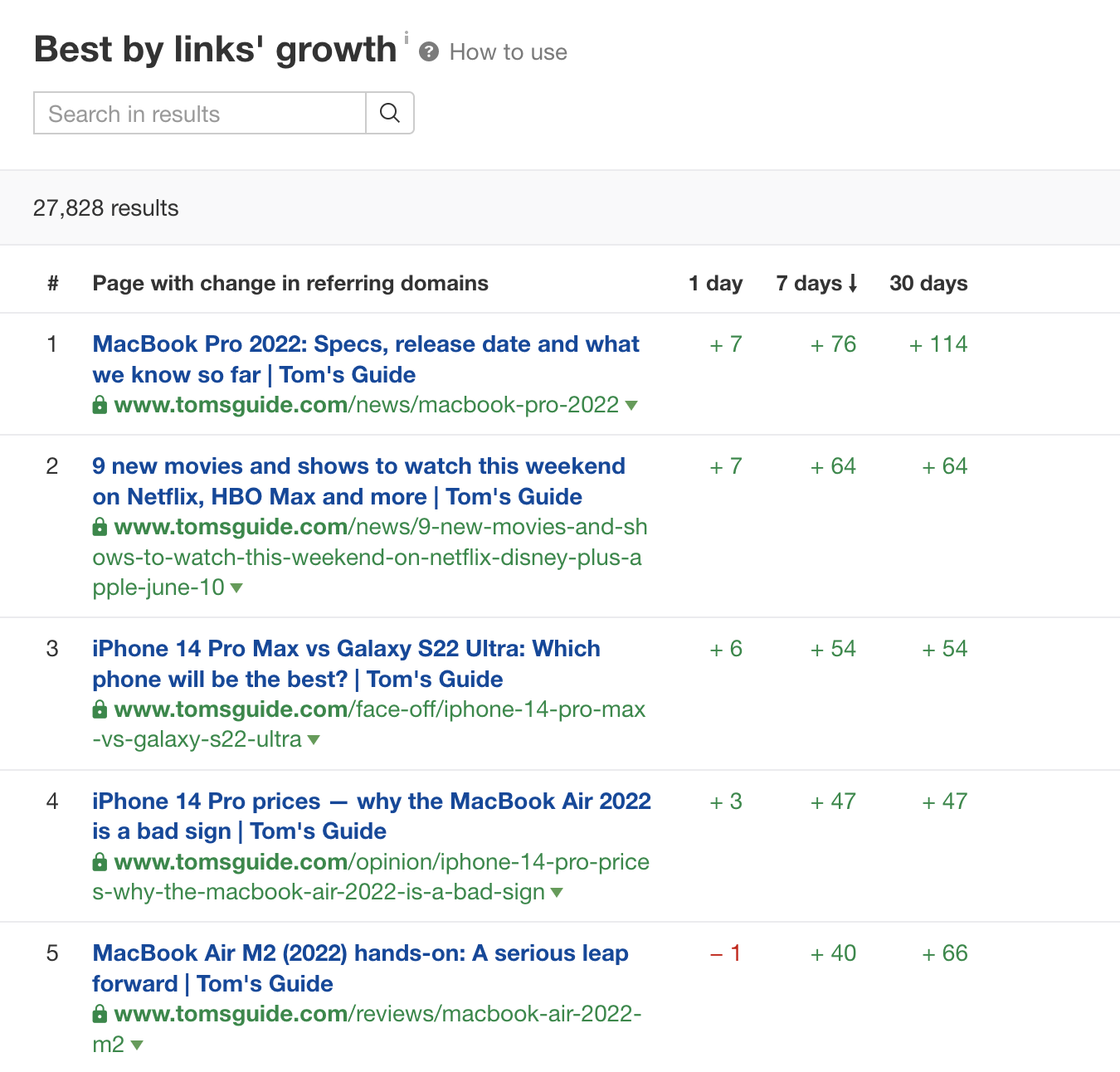 How Tom’s Guide Makes Its Money

Tom’s Guide is an authority in consumer electronics and software. And they have a nice mix of ads, sponsored, and affiliate content.

And so they have lots of outgoing affiliate links like:

Plus cool little features like this one on their homepage: 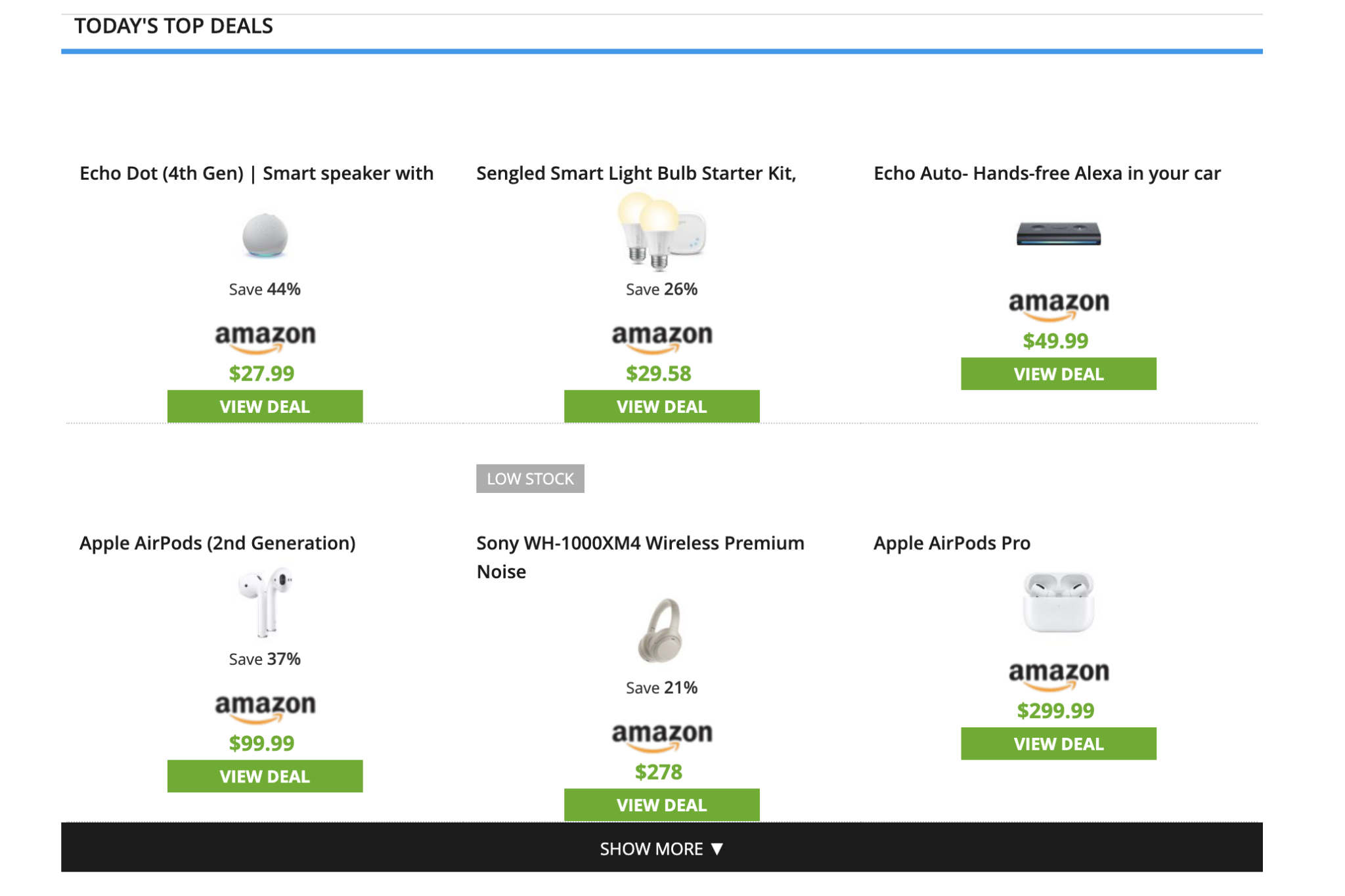 Their reviews highlight a formula that appears to be working very well for them.

Right off the bat, they have a quick and easy breakdown (standard stuff). 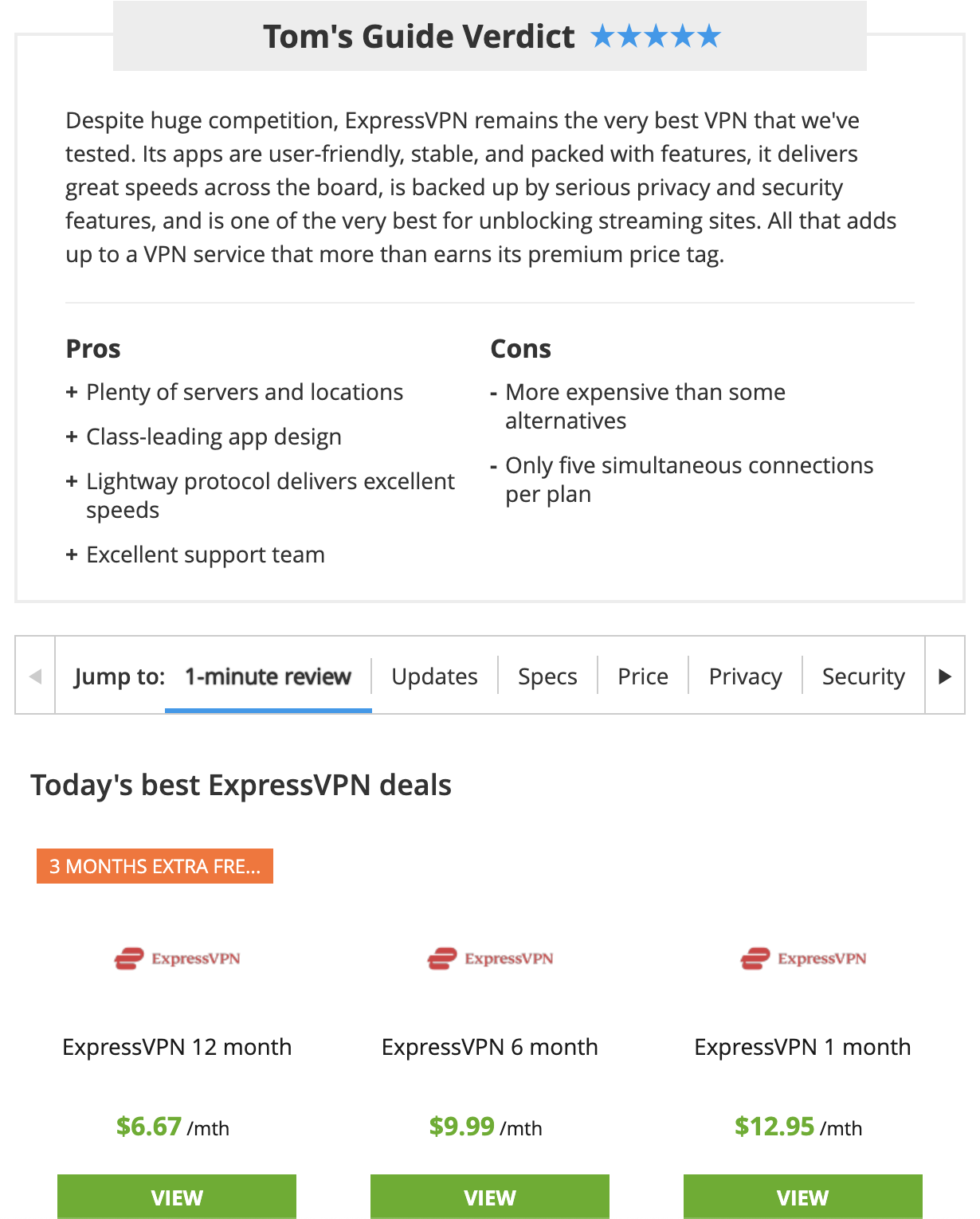 But one thing that stands out is their 1-minute review.

This is their version of TLDR. But instead of giving a typical point form list, they provide a concise but detailed 8 paragraph synopsis of their findings.

Not all niches will require this level of detail of course but it does make sense for the products and services that Tom’s Guide reviews.

You’ll also notice that within their reviews there are mostly contextual links.

Very rarely will they make use of buttons within the meat of the article.

Here are some other things they do too:

Here’s another example of some of their features from their iPhone 13 Pro Max review. 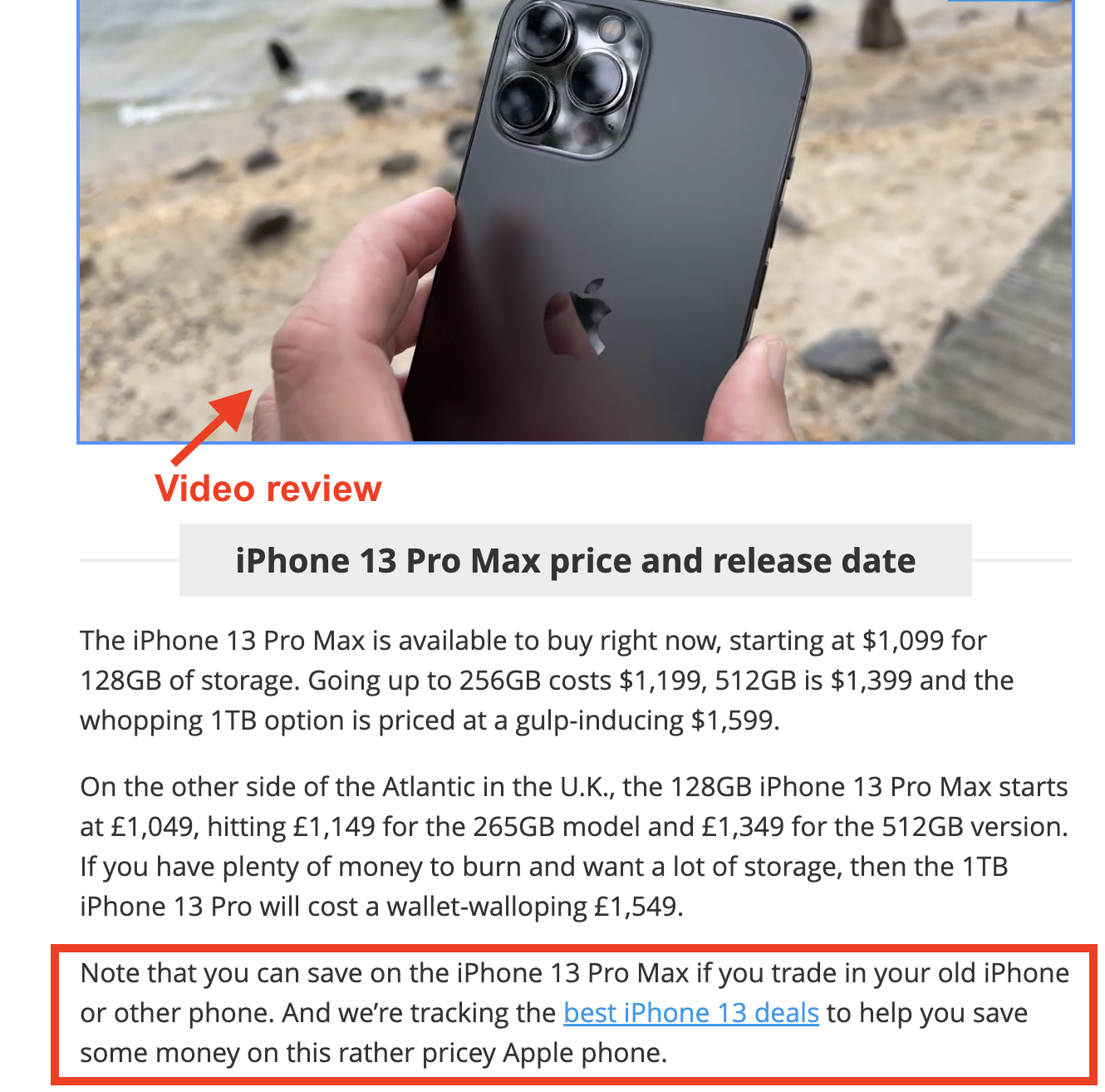 Their electronic reviews – likely in an effort to give the best possible user experience and match intent include tons of images and a video review.

We’ve shared a lot about the power of video for both the present and the future of affiliate sites.

But this review also includes 27 images of the phone being held, in use, or comparing its camera to other phones.

And their internal link ‘best iPhone deals’ leads to this page, Best iPhone 13 deals in June 2022 which has several potentially dynamic elements like the title and deals offered, and makes good use of buttons.

It’s also interesting to note that their buttons are green. 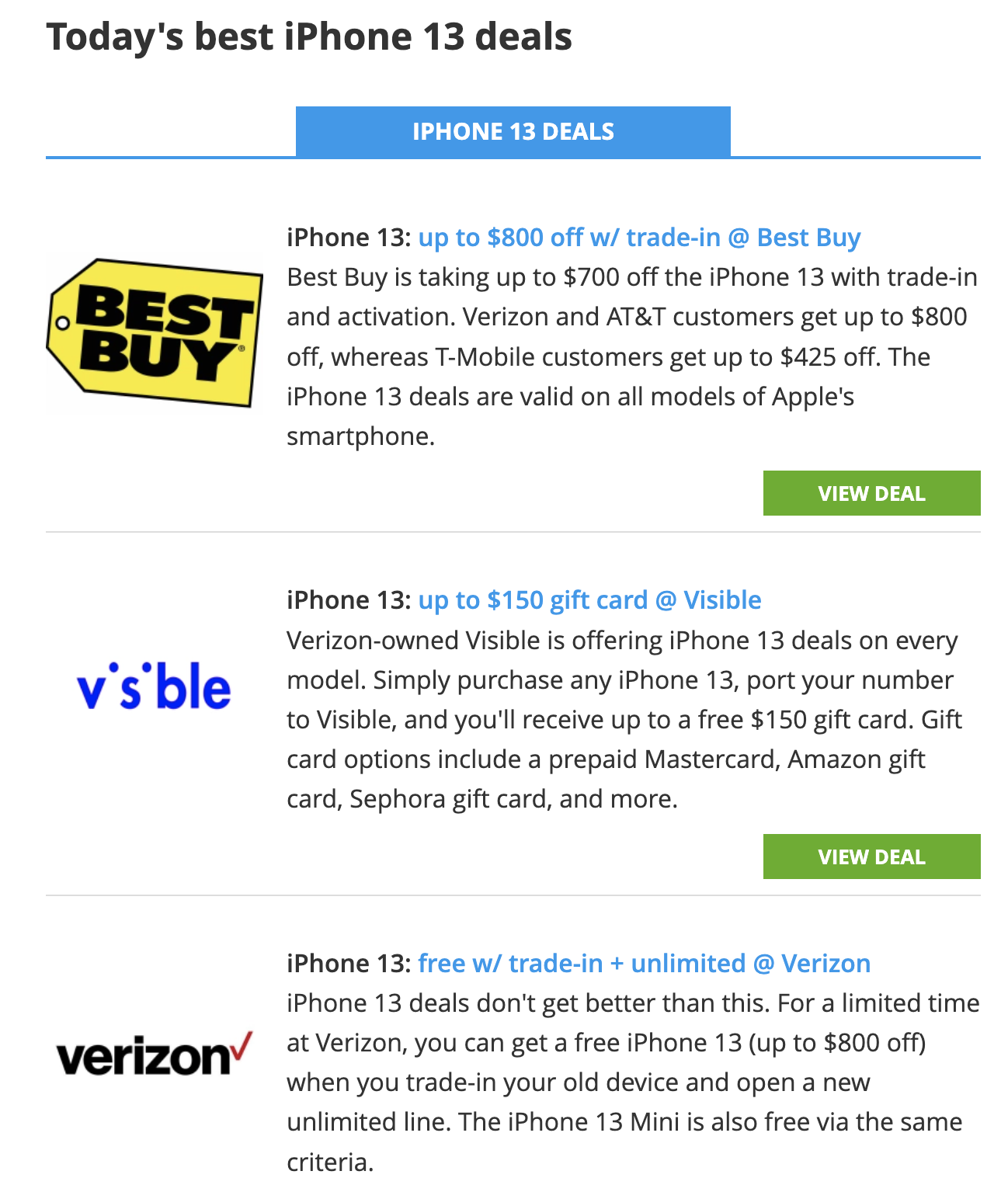 So How Much Are They Making?

Well, it’s tough to share a definite answer. And although not entirely accurate, SimilarWeb does help get a rough estimate of a site’s annual revenue.

At that number, if they were to sell today (at the low estimate of $4 million and a conservative multiple of x30), they would be looking at a sales price of $120 million.

That’s a big number. And while they do now have a big team and a big corporate owner, it’s important to remember that it all started with one guy named Tom (Thomas Pabst) typing away on his computer.

7 Ways to Create an Environment More Conducive to Writing

what i need for Affiliate marketing