Yep, Ahrefs Just Launched a $60 Million Search Engine! I Tried It Out and Felt Underwhelmed…

A 3-word domain…nice!  And they’ve already spent $60 million getting the servers and other infrastructure set up. But why in the world, would Ahrefs launch a brand new search engine to compete with the likes of Google?

Well, in a nutshell, they do have an interesting angle.  Ahrefs wants to pay content creators for the results that advertisers bid on, splitting revenue 90/10, where 90% of ad revenue goes to bloggers.

In other words, an advertiser pays Yep to advertise for a given query.  If a searcher visits your site for that given query, Yep will pay you (the content creator) 90% of the search ad revenue.

As a content creator, this sounds amazing!  Sign me up!  I’d love to get paid from the search engine AND still get to keep the ad revenue on my site.

However, there as so SO many questions…and BIG concerns after I tested it out.

In fact, the results were so underwhelming, that I won’t be going back until there are major changes.

Let’s dig into this for a second…

Why Would Ahrefs Launch a Search Engine?

Ahrefs is a well-known SEO tool, and has been crawling the web for many years.  With AhrefsBot, they’ve indexed 12 trillion links in their database.  It’s MASSIVE!

I have to imagine the founder was looking at this database and thought, “Well, how else can we monetize this?…Let’s make a search engine!”

Yep, they have the data to do so.

But starting a search engine and getting people to actually use it when Google is ubiquitous with search is a near-impossible task.

Here’s the background, according to Yep:

Yep is the brainchild of Dmitry Gerasimenko, and was brought to life by the Ahrefs team.

Ahrefs runs an internet-scale bot that’s been crawling the entire web 24/7 since 2010, storing, indexing and structuring petabytes of information. With this data, we created one of the leading SEO toolsets worldwide.

Our aim has always been to build good products faster than the giants and avoid feeding them endlessly by leaving money in the community.

Will Rewarding Creators Be Enough to Attract Searchers?

Google is a default search engine.

DuckDuckGo is playing the angle of the “privacy” search engine.

Yep, is trying to play the Google is evil card (in a way), by trying to reward bloggers with 90% of ad revenue.  Again, this sounds great as a blogger!  Just send me my check every month.

So, far I don’t see a way for me as a content creator to get paid from Yep.  I’m not sure when their strategy of paying content creators or accepting advertisers will actually happen, but it’s not live yet from what I can tell.

However, will the “but creators should get paid for search results!” argument work on the average joe?

In my opinion, it probably won’t.  The general searcher doesn’t understand how search results, content, and advertising all work together…and they mostly don’t care.

That’s the harsh reality.  I’ll never say never, but Ahrefs may be trying to climb a hill not worth climbing. $60 million is unfortunately nowhere close to the investment needed to make a tiny dent in the world of search.

Does “Yep” Even Work? Nope.

And worst of all, the search engine doesn’t really work yet.  Yep, I tried it.

Now, maybe they are just getting slammed with traffic because this bad boy just launched.  As a business founder I can cut them some slack.

But my tests of their search engine did not go well at all.

I searched for “Niche Pursuits”.  It literally took over 30 seconds for Yep to return any results.  Ouch!

Users want speed in a search engine, and Yep is not fast.  I felt like I was back in 1999 on dial-up internet.  Without blazing fast speed, Ahrefs will NEVER attract real users to its search engine.

Then I typed a throwback phrase to an early blog post I wrote, “Spencer Likes Honeycombs“.  After waiting for the results, I got met with a “Something Went Wrong” message.

Sure, “Spencer Likes Honeycombs” is obscure…but give me some results…something! 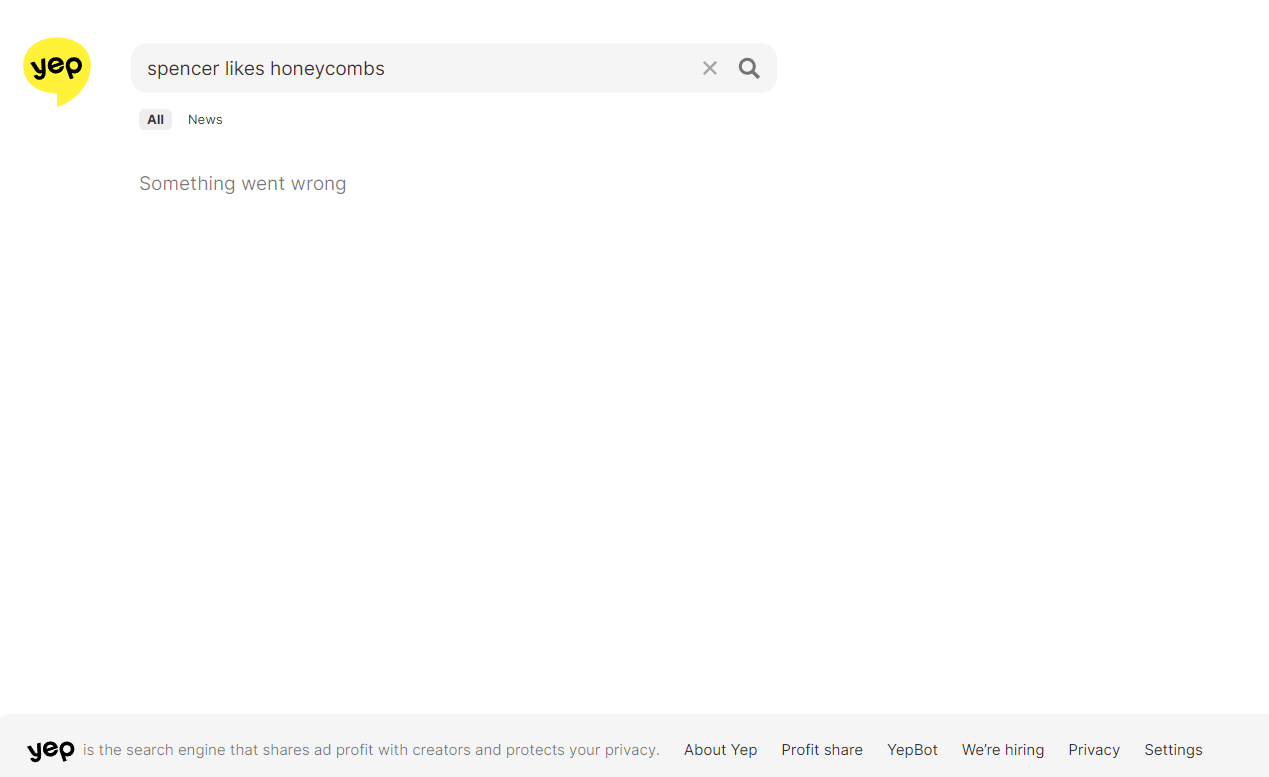 The final kicker was that I noticed that after doing a search on Yep, it recommended that I “Try Searching On” – Google, Bing, Mojeek, or DuckDuckGo.

So, if Yep recommends you try searching elsewhere, I’m going to do the same.

As exciting as the news is of a search engine that directly rewards content creators (that’s me!), for now it’s not useable and has a near-impossible task ahead of it to attract real users.

I’m drowning in new food! Can someone please restructure me out of this mess?

When It Makes Sense To NOT Pay Off Your Student Loans

Zero to Hero In 5 Easy Steps

Sound Agriculture will expand thanks to a fresh $75m fundraise

#112 Diversify Your Portfolio With Industrial Investing

What It Is And How To Avoid It

15 States With the Greatest Labor Productivity