Use E.g. Or I.e. Correctly Every Time | Writer’s Relief 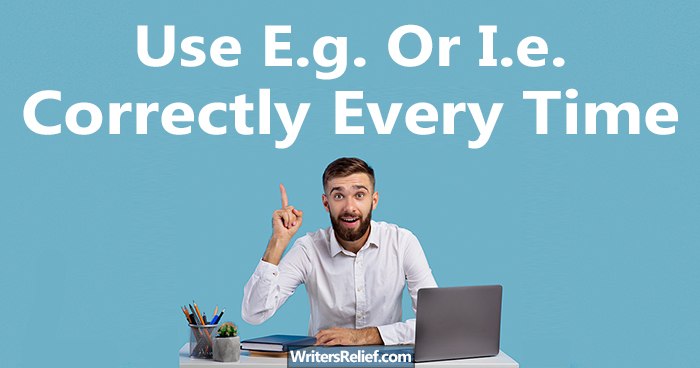 You may have the abbreviations LOL and OMG down pat, but if you’re a writer, it’s more important that you are able to use “e.g.” and “i.e.” correctly. Many writers mistakenly believe these two abbreviations are interchangeable—they’re not. Get ready for some really old-school Latin: The grammar geeks at Writer’s Relief have tips to help you use “e.g.” and “i.e.” correctly every time.

What does “e.g.” stand for, and how is it used? “E.g.” is an abbreviation for the Latin phrase exempli gratia, translating to “for example.” Here’s a tip: To remember what “e.g.” stands for, think “example given.”

“E.g.” is used—as you may have guessed—to provide examples illustrating your point. Here’s an example of giving those examples!

New York City is home to many famous attractions, e.g., the Statue of Liberty, the Empire State Building, and Times Square.

What does “i.e.” stand for, and how is it used? “I.e.” comes from the Latin phrase id est. Literally translated to “that is,” “i.e.” is commonly used to give definitions or restatements.

“I.e.” is used to either clarify your idea or limit the scope of it. Another tip: Imagine the “i” as standing for “in other words…”

Take a look at this example:

Only one country, i.e., the United States, has hosted the Winter Olympics four times.

Grammar Tips That Apply To Both Abbreviations

Use lowercase letters (unless they begin a sentence). You shouldn’t capitalize the letters in either “e.g.” or “i.e.” when they’re used in the middle of a sentence.

Use commas. A comma is used after the abbreviation itself. Also, if your abbreviation precedes multiple examples or clarifying clauses, you need to use commas in between the examples. Remember our sample sentence for “e.g.” listed above? Take another look at where we’ve placed our commas: New York City is home to many famous attractions, e.g., the Statue of Liberty, the Empire State Building, and Times Square.

Use parentheses (if you wish). If you’d like your clarification or examples to be set apart from the rest of your sentence, feel free to enclose your abbreviation and the clause after it in parentheses. Let’s revisit our sample sentence for “i.e.” above and add parentheses to it: Only one country (i.e., the United States) has hosted the Winter Olympics four times.

Don’t use italics. Though these abbreviations both originate from Latin, they don’t need to be italicized. When a word or phrase that is not English becomes so commonly used that it is listed in an English language dictionary (the OED, Merriam-Webster, etc.), you do not need to italicize that word or phrase.

Here are pairs of similar sentences, one where “e.g.” is the correct abbreviation to use, the other where “i.e.” is correct!

For more grammatical tips and tricks, check out these helpful articles from the Writer’s Relief blog:

10 Grammar Rules You Can Break—And Maybe Should! | Writer’s Relief

Grammar Tip: When To Use Among Or Between | Writer’s Relief

Question: What grammar rule always trips you up?

Is Blogging Anonymously Possible? How to Write Anonymous Blog

Is Blogging Anonymously Possible? How to Write Anonymous Blog

How To Make Money on Tik Tok