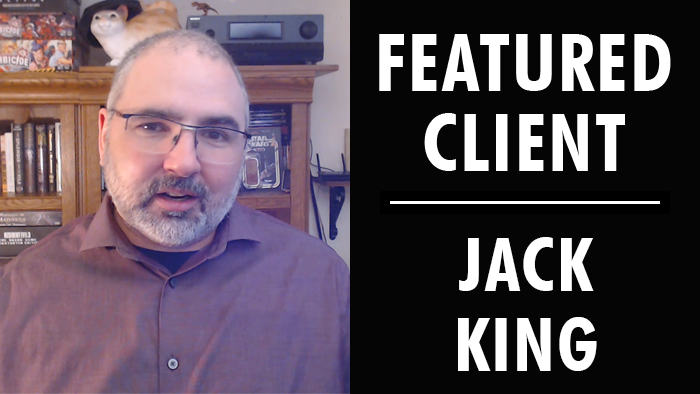 
Click on the video above to hear about Jack’s experience with Writer’s Relief!

Sixty-hour workweeks don’t leave much time for writing—but Jack King found writing offered great stress relief from all that work! But after writing numerous stories, he realized there wasn’t any time left in the day (or night) for submitting his work. Fortunately, Jack found Writer’s Relief to handle the research and busywork of making submissions. Now Jack’s been published in many literary journals, including Barcelona Review, Sandpiper, Evening Street, Sanskrit, Litbreak, The Penmen Review, and Sand Hill Review. His work in fiction has garnered him first-place finishes in the Maryland Writers’ Association’s Novel and Short Story Contests in 2006 and 2012, respectively—and he’s also been nominated for a Pushcart Prize.

Read on and watch the video to hear how Writer’s Relief helped Jack fit a successful submission schedule into his busy life.

In Jack’s Own Words

I’ve always been a writer, but writing was just something I did—it wasn’t my job. I fell into the IT industry in my early twenties. After a few decades of brutal hours building networks and writing software, I’d amassed a huge backlog of stories, but hadn’t published more than a few of them. Writing became a way to relieve stress, to turn that inward eye and spark the creativity rarely found in silicone and compiled code.

Writer’s Relief is exactly the service I needed—a group of dedicated proofreaders and experts to help place my work. In the years before I joined, I’d had only five stories published, but not because I wasn’t writing. Since joining Writer’s Relief, nearly everything they help me submit has found a home. I’ve had fourteen acceptances out of around twenty stories submitted. Since I rarely work less than sixty hours a week, I need the kind of schedule and deadlines Writer’s Relief holds me to.

I can easily recommend their services to anyone who finds submitting daunting, or anyone like me who’s too busy to find the right home for their work. Having a dedicated staff of submission specialists, proofreaders, researchers, and cover/query letter writers is invaluable.

Jack King has also been published in Menacing Hedge, Blue Lake Review, Forge, Five on the Fifth, Oklahoma Review, Gemini, Epiphany, SENSIAC, ISSA, InfoWorld, and The Home of the Brave Anthology. He was awarded third place in the 2014 Sand Hills Writers Series short fiction contest. Jack served as a resident reader for Carve from 2011–2015 and assisted in the yearly Raymond Carver Short Story Contest. He received his MFA from Queen’s University and has worked for over twenty-five years in the IT industry. When not writing, he can often be found stress-baking.

Construction Disputes and How to Avoid Them

Writing with Your Back Brain | Writer’s Relief

Should You Be Writing A Novella? | Writer’s Relief

Should You Be Writing A Novella? | Writer’s Relief

A quick and easy guide to investment